How to Make a Paper Mache Fish – 6 Ideas 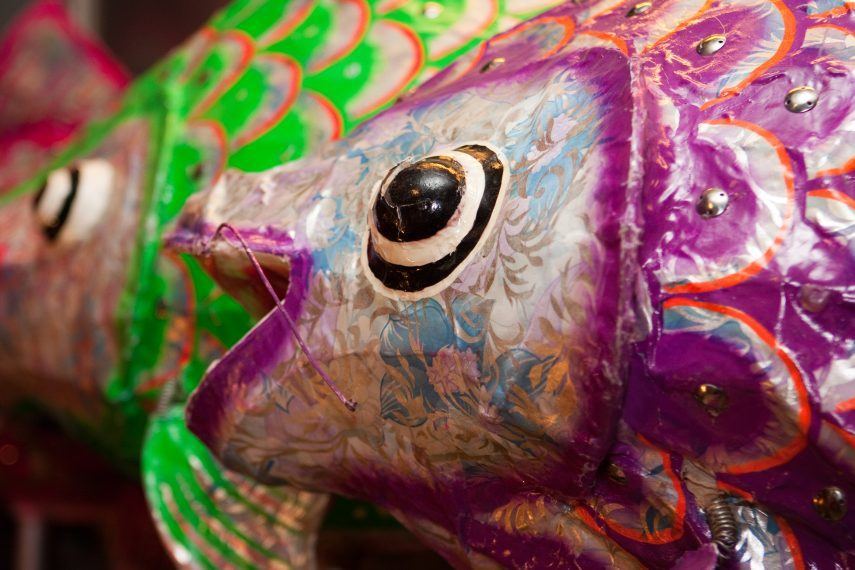 There's nothing quite like some unique creatures from under the sea ​to liven up any bedroom or birthday party. That's why we're bringing you some great ideas for how to make a paper mache fish.

How to make paper mache paste

Surely you'll agree that before you can do anything, you have to learn how to make paper mache paste.

Well if you've never used this material before when crafting, you're in luck! It's ridiculously easy to make.

The most basic recipe is to simply combine 1 part flour to 1 part water, mix it until you get a glue-like consistency, and add water if you need to thin it out. Pretty easy, right?

However, it you want info on other options​, check out our article on how to make a paper mache mask for 5 more paste recipes.

How to make a paper mache fish piñata

Sherri, from over at About Family Crafts​, has a great tutorial for making a fish piñata for your next party.

All you need is a ballon, some cardboard and the paste to make the fish. The way you decorate it is, of course, entirely up to you, but we suspect that once you see how cool hers looks, you might just create the same exact fish. 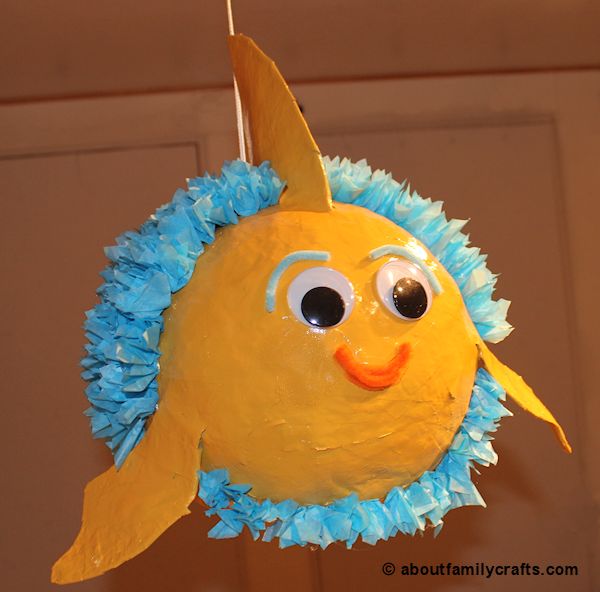 From the google eyes and the paper tissue squares to the blue pipe cleaner eyebrows, you might decide to spare your adorable fish instead of beating it with a stick.

Another awesome tutorial on how to make a paper mache fish piñata comes to us from a crafter named Maggy, over at Red Ted Art.

She uses a balloon and cardboard for the body of the fish, and she leaves a pretty large hole at the ​top, so you can fill your fish with candy or other kinds of small treats. 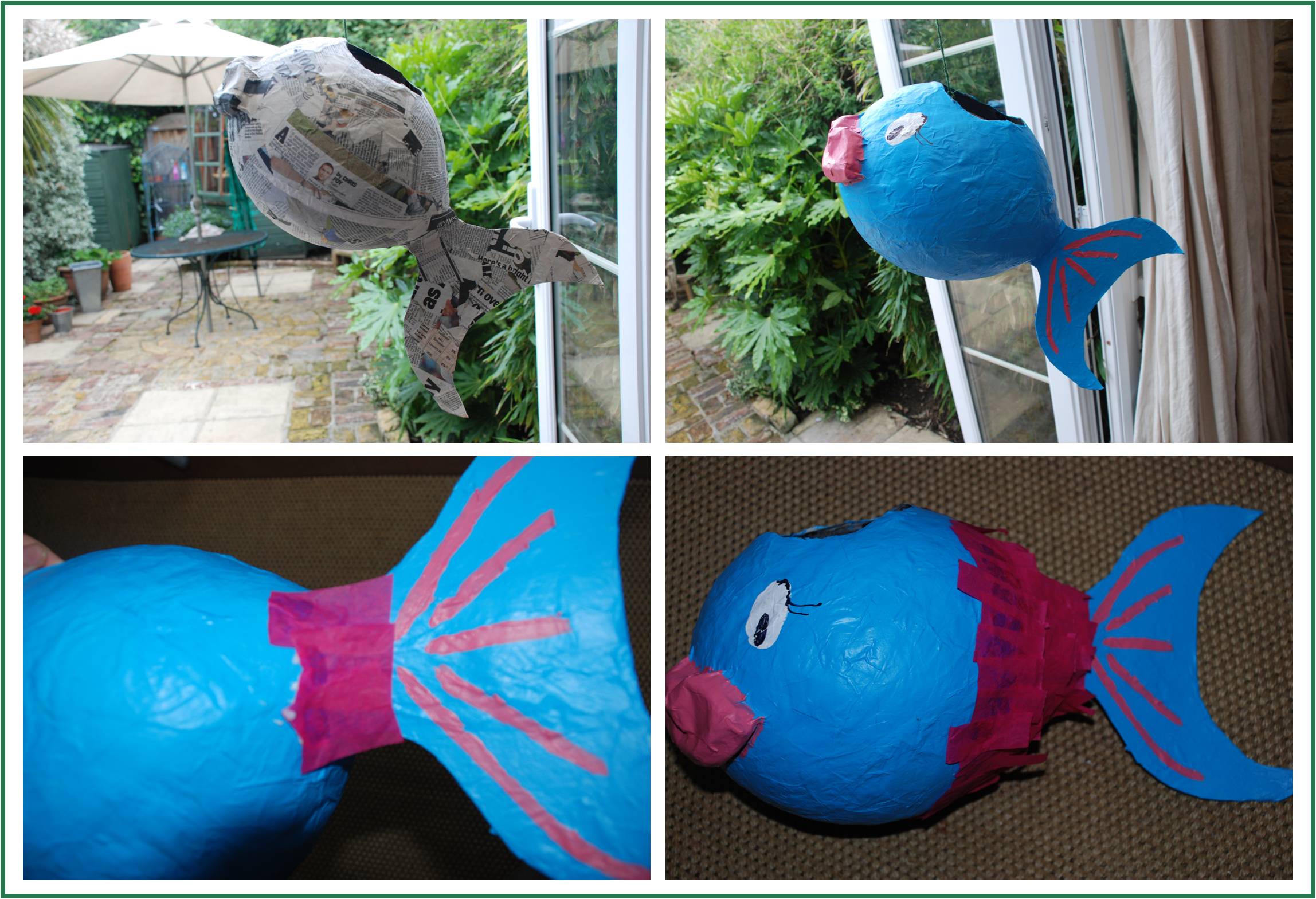 We think her fish is pretty darn festive and is great inspiration for making your own paper mache fish piñata.

How to make a Nemo paper mache fish

Charisse, from Whimsy Paper Mache, one of our favorite paper mache sites, has a great video where she walks you through the process of making your very own Nemo.

The basic process is more or less the same as above​: you need some cardboard, a balloon and the paper mache paste.

After you create the armature, or the shape of the fish with its fins, you apply 10 layers (10!) of paper mache, to make sure it's nice and strong.​

Once it's completely dry, Charisse has you sand it to get rid of any dried paste, and then you can start painting it.

She recommends starting with a primer, such as white paint, and then going hog wild with the other colors to create the perfect Nemo.

Other inspiration for making a fish out of paper mache

For a more informal approach, we love this tutorial from Anna-Leigh at My Lens is Ruby Red.

She and her daughter created an assortment of unique paper mache fishes for her 4-year-old's birthday party, and the end result was very fun. 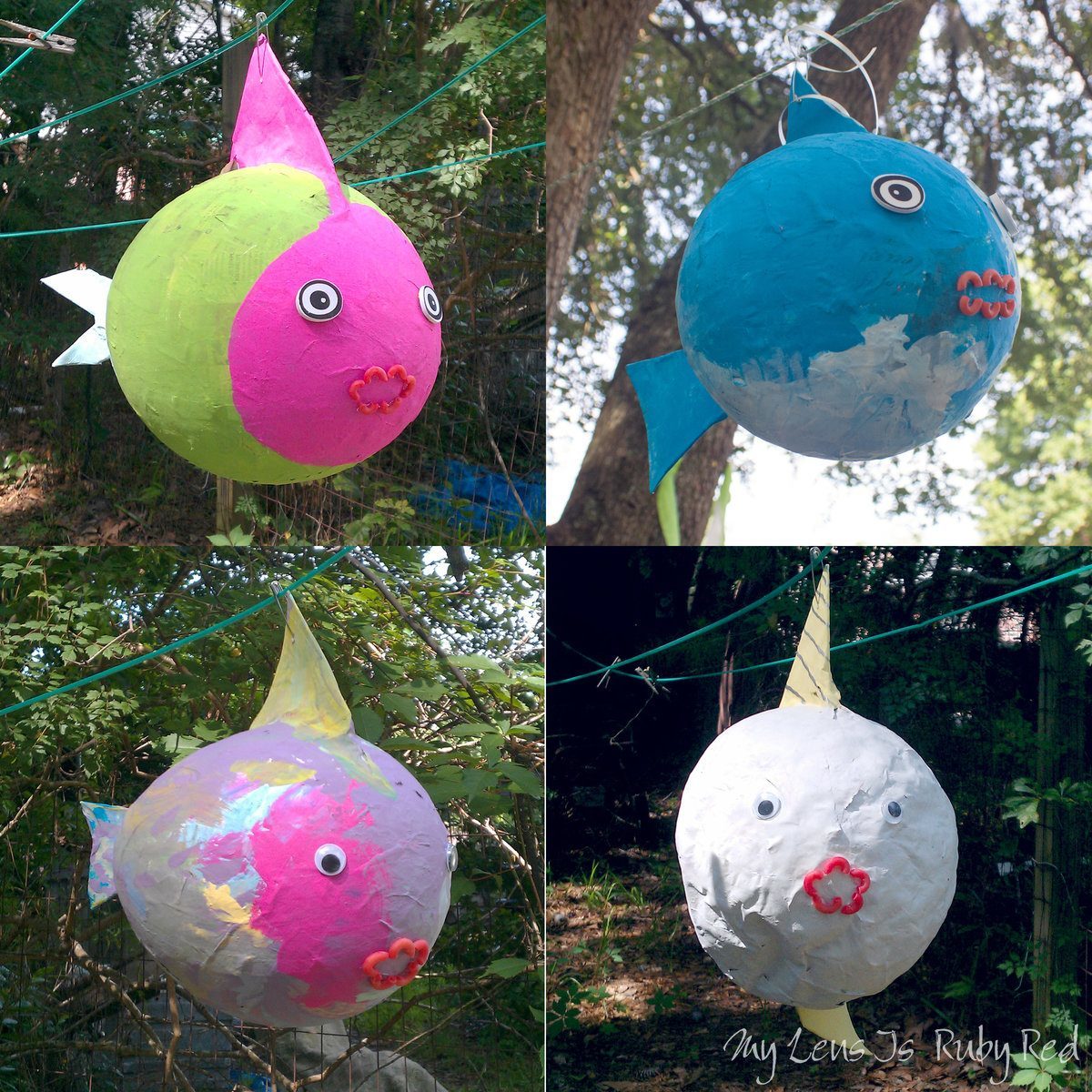 Image: My Lens is Ruby Red

We love the look of these unique fish, especially the macaroni lips and the bright colors.

Chrissie, from Flip Flops and Applesauce, and her kids went about making their paper mache fish a little bit differently.

First of all, they used smaller balloons. Second, they glued on patterned paper, eliminating the need to paint and giving their final creations a singular look.

Once the paper mached balloons dried, they added fins made with paper, and googly eyes. 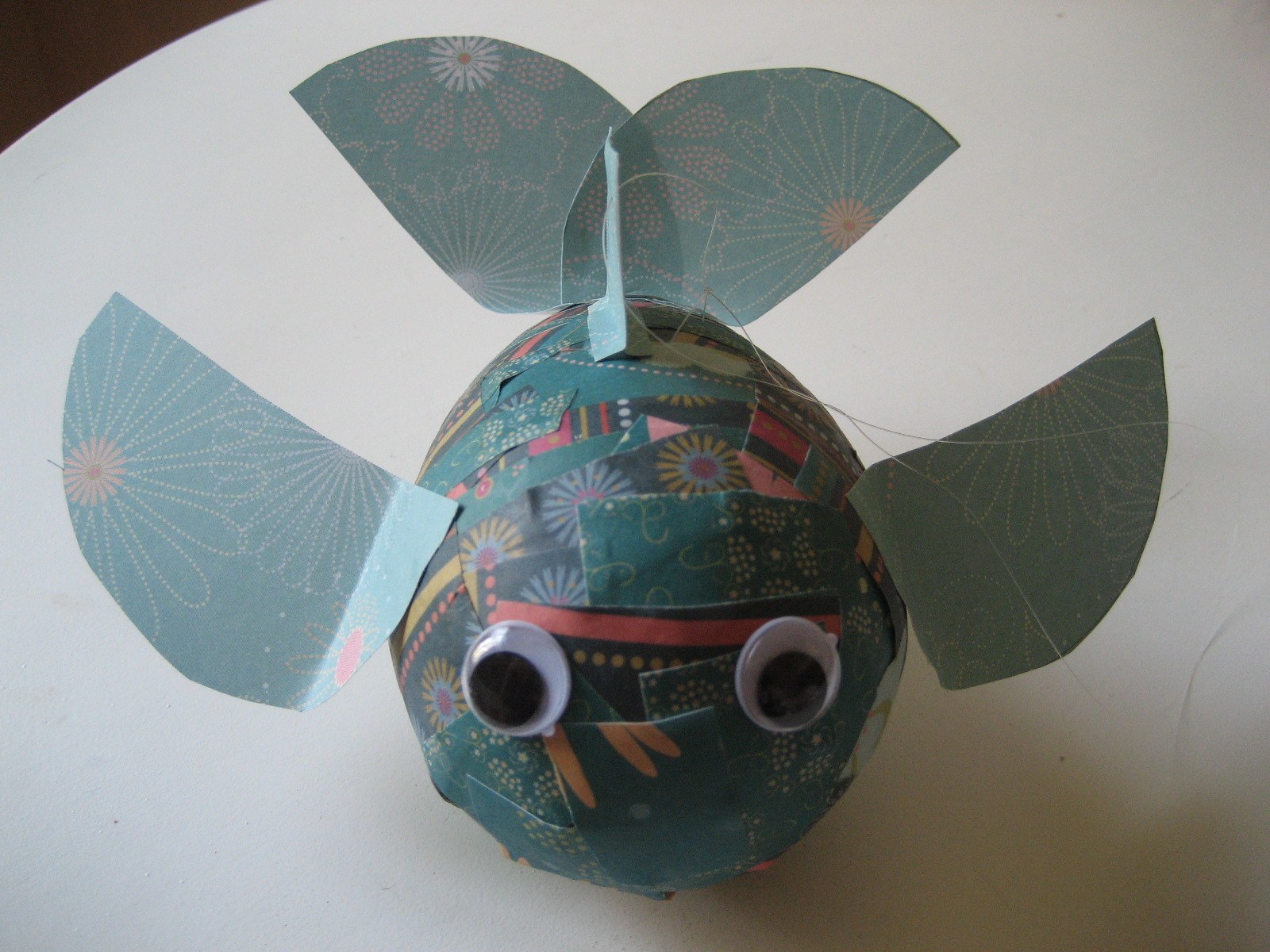 How to make a paper mache fish mask

While it's not exactly a tutorial, if you need some inspiration for your fish mask, there's a short post you should check out on Geeklabs.blogspot.com.​

They used a balloon, cardboard and paper mache to create the mask, and then they used styrofoam for the eyes. They painted them with spray paint.

And, as an extra special feature, they wired up one of the masks with lights! It doesn't get any cooler than that. 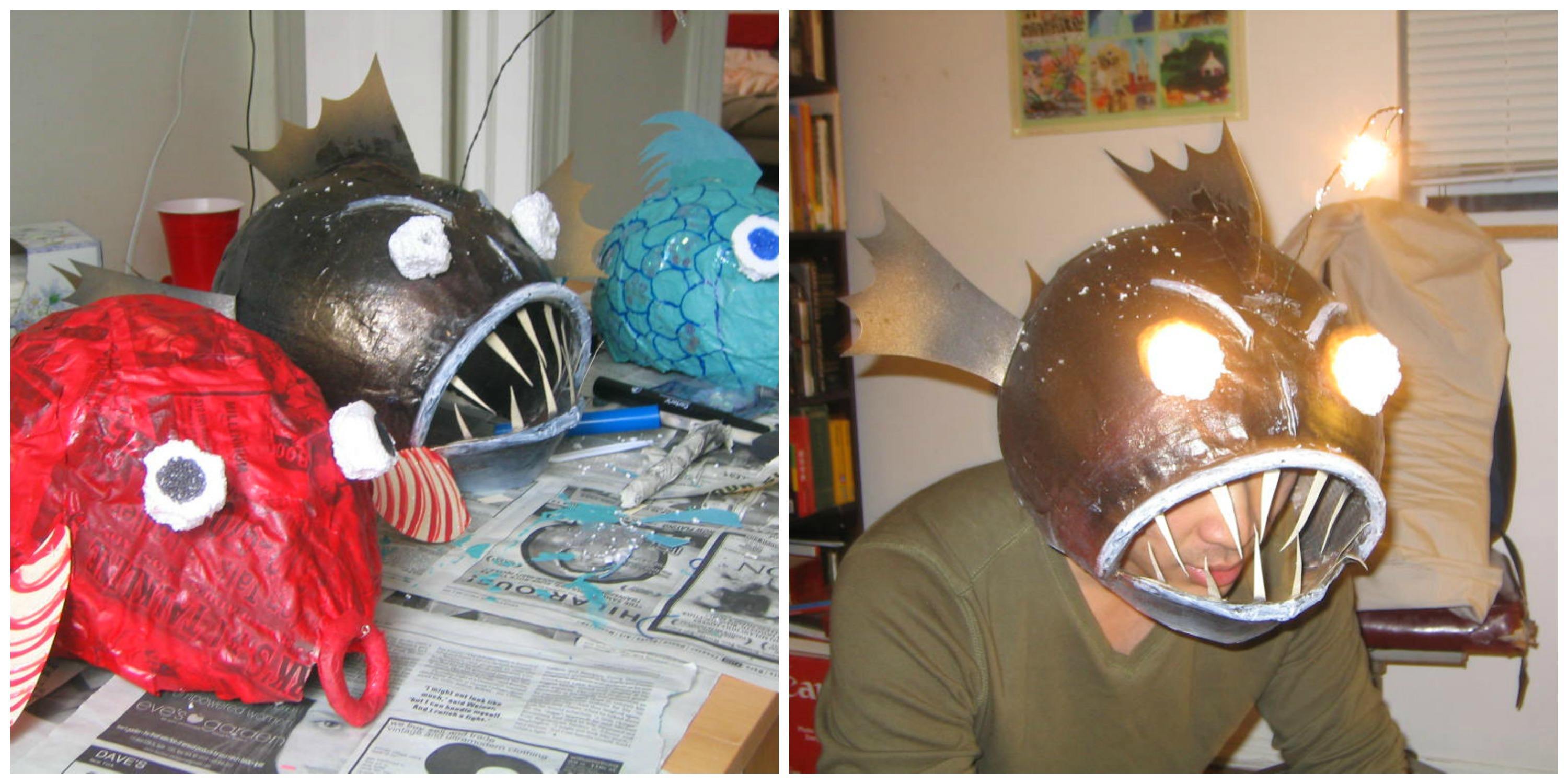 We hope you found plenty of inspiration here and are already gathering the materials to make your fish out of paper mache. Let us know how it goes and send us a photo!

How to Make Chalk Paint for Kids – 5 Ways

How to Make Homemade Glue – 10 Recipes

How to Make Felt Flowers – 16 Ways

How to Make a Pirate Ship Out of Cardboard Boxes

How to Create a Scavenger Hunt

Best Hot Glue Gun for Crafts – Use the Right Tool