How to Make a Pirate Ship Out of Cardboard Boxes

Ahoy maties! We've got a great activity for you!

If your kids have plans to set sail in dangerous waters or hunt for a hidden treasure, then they're going to need the appropriate vessel. You can't send them out unprepared, so with that in mind, we compiled a list of the best tutorials on how to make a pirate ship out of cardboard boxes.

Whatever your level of craftiness and the zeal of your pint-sized pirate, we have the ship for you.  ​

So get out your eye patch, your hooked hand, and your spyglass—we're about to build a ship. And don't forget to put your little swashbuckler to work! A lack of cooperation would surely mean he or she will have to walk the plank.

How to build a pirate ship out of cardboard boxes

First up we have Anna, from over at Pattern Me Mommy, who has an absolutely awesome pirate ship tutorial.

Her husband Mike took on the project, and not only did it provide the perfect opportunity to spend some QT with their son, at the end of the day they built a pretty badass ship. ​

Although the list of supplies is somewhat daunting (packing tape, rope, wire ring anchor points, drywall screws, pine board, dowel rods...), a quick trip to Home Depot and/or Lowe's will provide you with everything you're going to need. 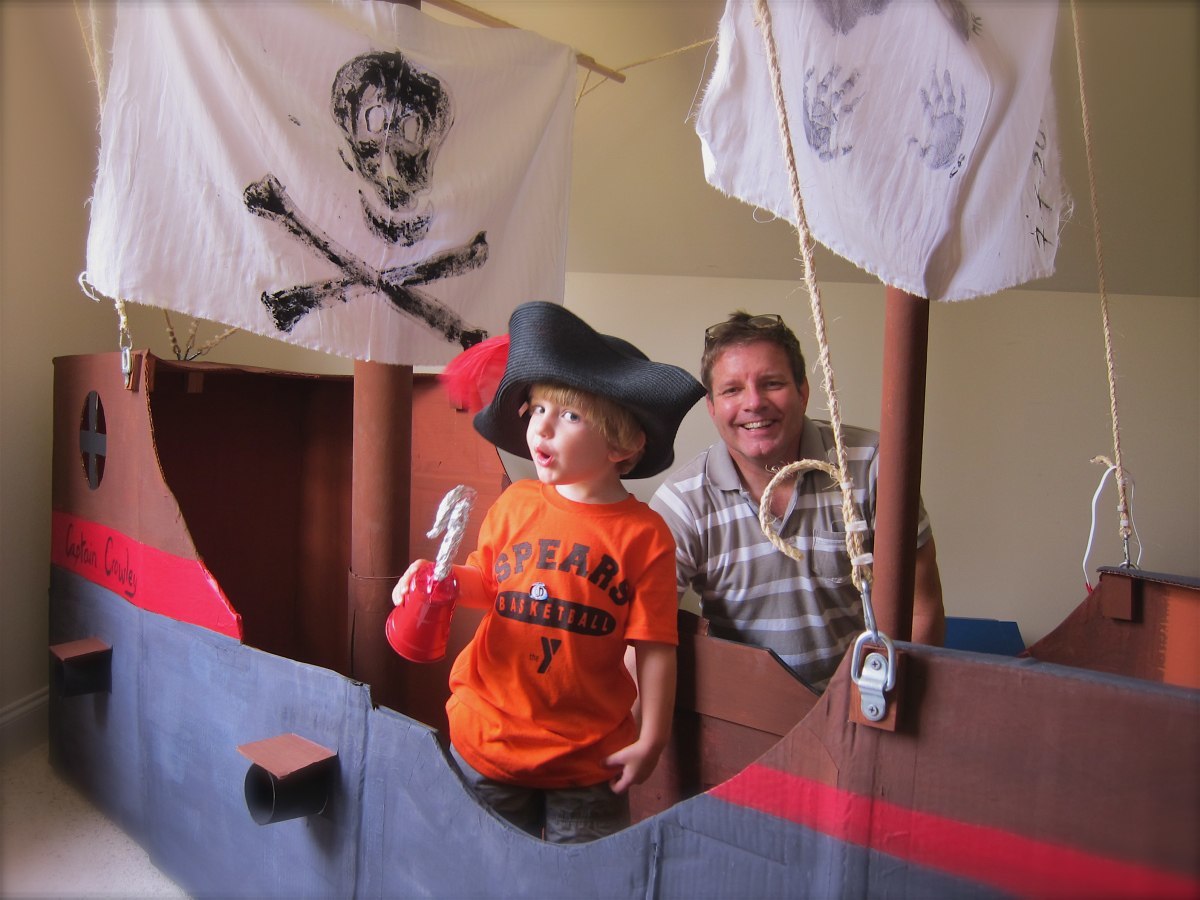 You can find another great pirate ship over at Create in the Chaos. Ellen and her three boys show you exactly how they do it, step by step.

For this one, all you're going to need is 2 large cardboard boxes, some duct tape, and a box cutter. Depending on your little pirate's desires, you could potentially paint it, but here you get a basic idea of how to put it together. 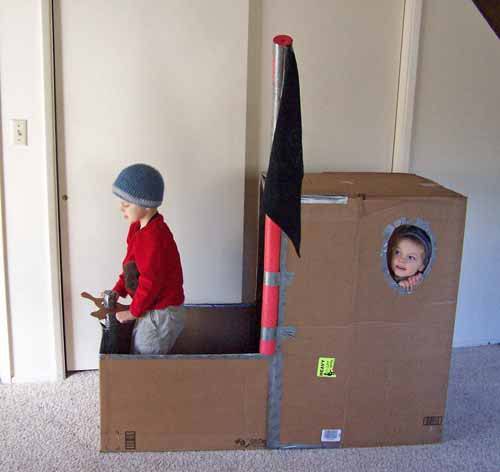 Image: Create in the Chaos

Michelle from Molly Moo Crafts offers yet another approach to making your pirate ship, and besides the fact that it looks amazing, she made it in less than an hour! Very impressive.

We should note though, that your kids won't be able to climb inside this one. This ship is for dolls and action figures only.

You're only going to need a handful of items to do this craft: a cardboard box, of course; a glue gun, a craft knife, a ruler, a pencil and a marker, twine, twigs, and fabric for the sail. If you've got these items on hand, we have the ship for you! 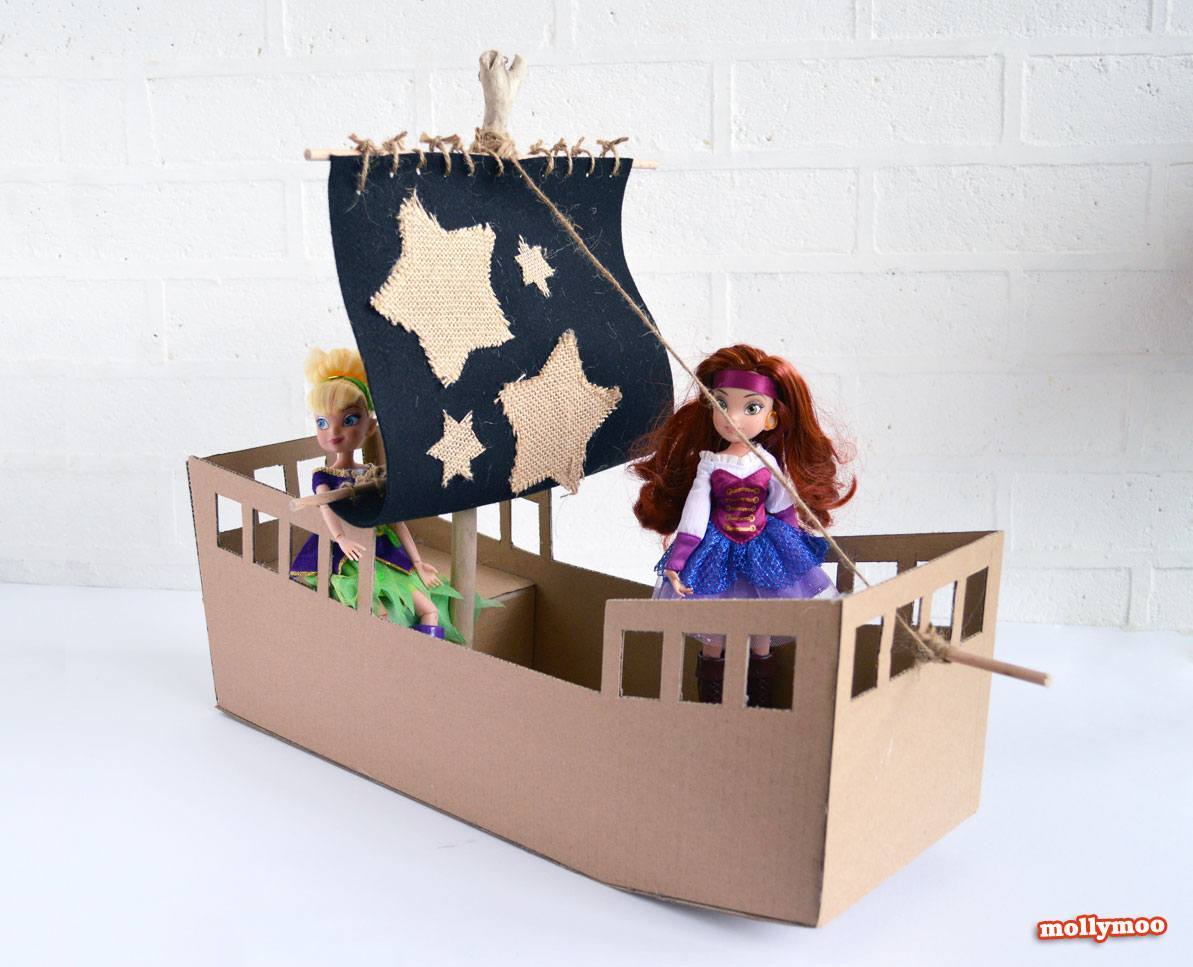 Another option along these lines, i.e. a small pirate ship for your child's toys to play in, comes from Maggie at Red Ted Art.

Unlike the others, she puts her pirate ship together with a medium-sized delivery box and then adds a layer of paper mache to give it more stability. This step is optional, but we think it gives the ship a nice, unique touch. 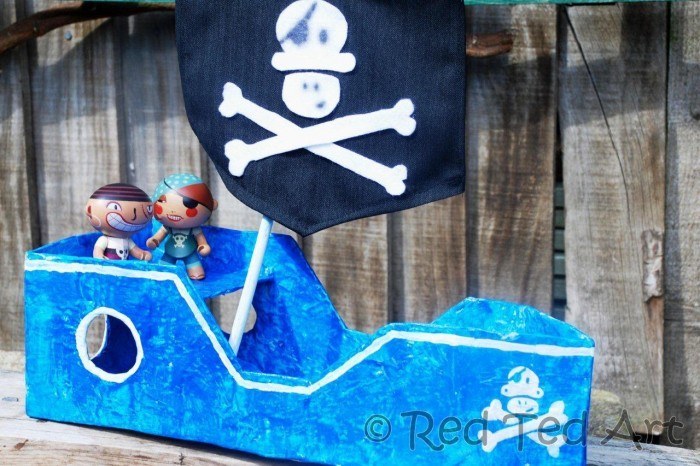 Amanda Medlin shows us yet another option for making our own pirate ship. She and her husband and their kids build a pretty impressive vessel in their tutorial.

From the glitter anchor to the PVC pipe sail to the telescope/cañon, which shoots out deadly ping pong balls, this option will surely serve as wonderful inspiration. 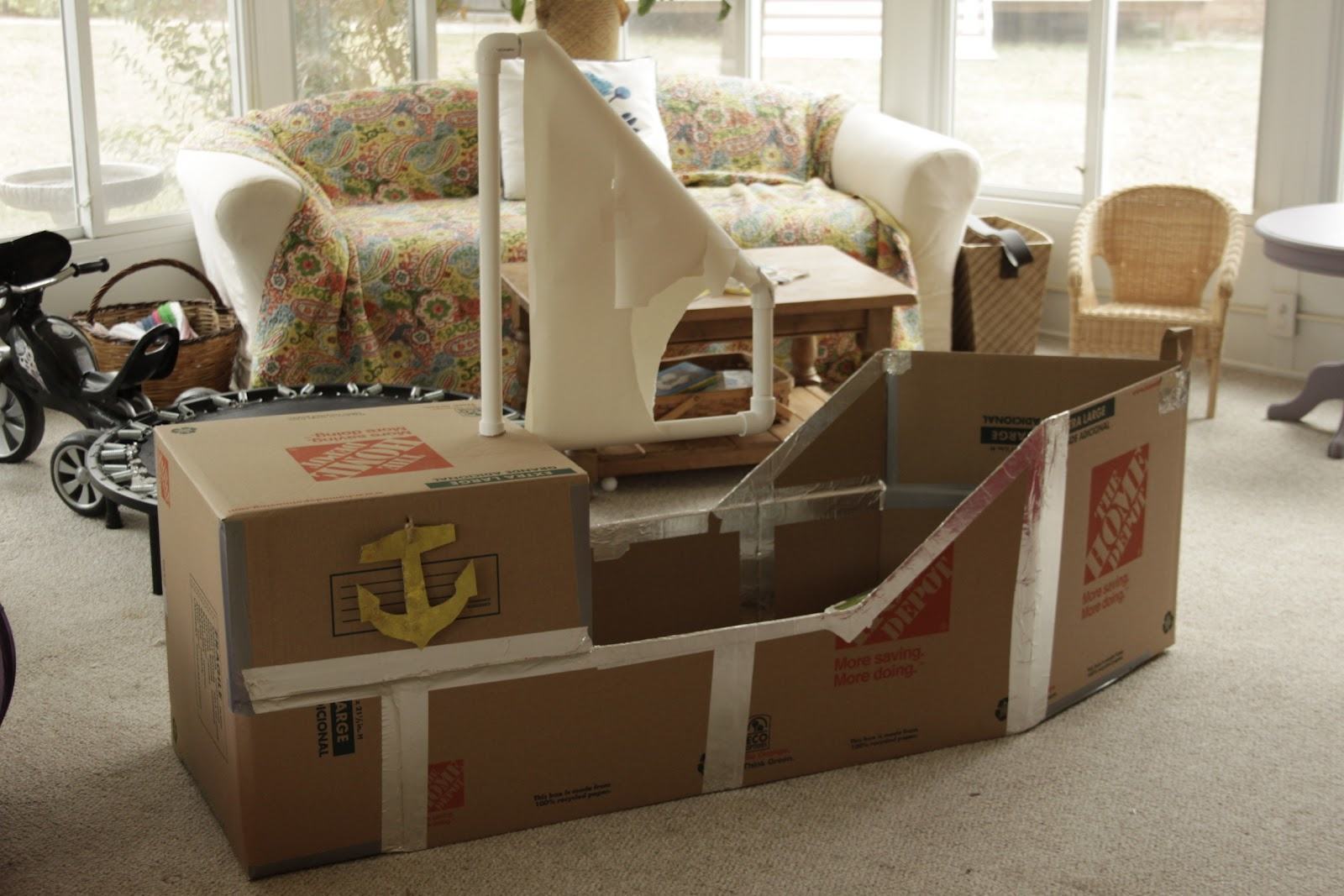 Kate, from Kate's Creative Space, really pulls out all the stops on her ship.

She takes pirate shipbuilding up a notch with an artist's touch, using wood-effect wallpaper to give the ship a "nautical" look,  curtain rings to look like life-rings, and a realistic-looking pirate treasure map, complete with singed edges.

This is definitely one ship you want to steer clear of should it cross your path. ​ 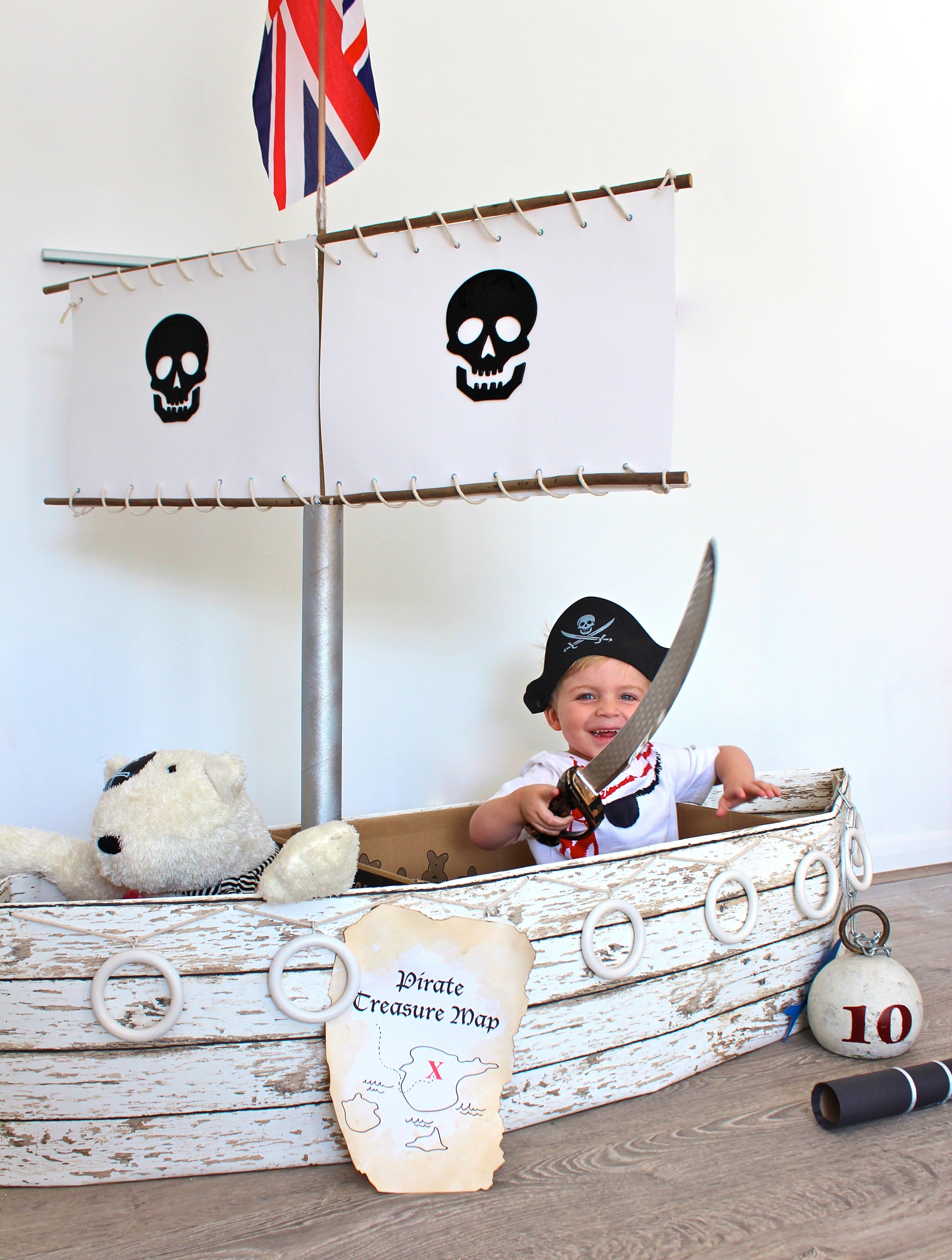 At Weird, Unsocialized Homeschoolers, Stef—who claims not to be crafty—shows us how to put together a pretty darn crafty pirate ship any kid would love.

We love this tutorial for several reasons. Not only does the ship look awesome, Stef includes a handful of tips that will come in handy for any pirate shipbuilder and​ she has some great suggestions for using your ship to create a unique learning experience.

And last but certainly not least, we'd like to highlight Lorraine's tutorial over at Ikat Bag. In addition to having a great sense of humor, she skillfully put together an impressive ship with the help of her 3 daughters.

It has a wheel, multiple sails, and a perch for the captain's parrot, and although her daughter names it Queen of the Waves (a decidedly un-pirate-y name), it would indubitably commend respect in the most dangerous pirate-infested waters. 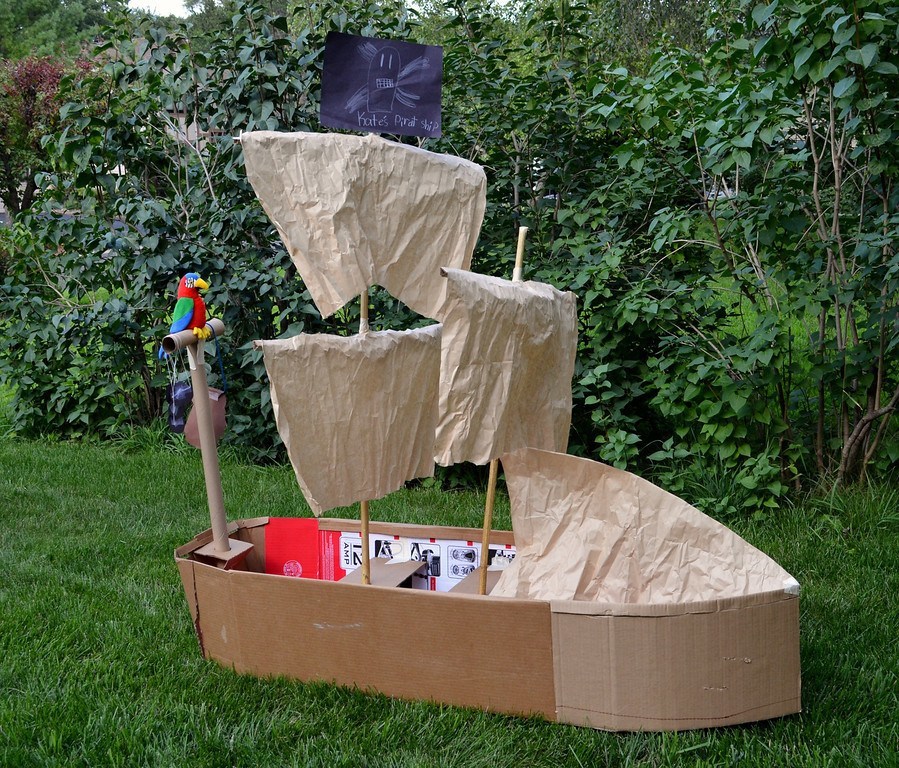 There's a good chance you'll want your ship to be ready in time for International Talk Like a Pirate Day, which usually falls in September, so start gathering your materials now that you know how to make a pirate ship out of cardboard boxes.

What are you waiting for? There are ships to be pillaged and booty to be stolen!

How to Make Chalk Paint for Kids – 5 Ways

How to Make Homemade Glue – 10 Recipes

How to Make Felt Flowers – 16 Ways

How to Create a Scavenger Hunt

How to Make a Paper Mache Fish – 6 Ideas

Best Hot Glue Gun for Crafts – Use the Right Tool